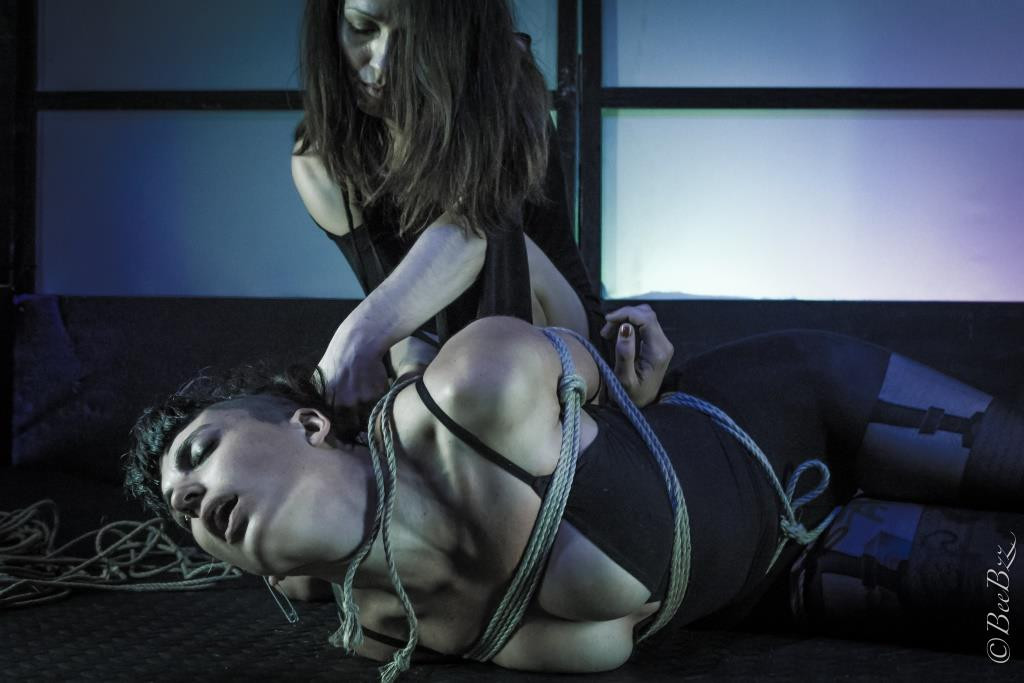 If you don't like reading, I recently made a video which attempts to answer this question. The answer, in short, is whatever definition of shibari rocks your boat. In this video, I hope to show you what you could be missing as the larger part is often unseen ;-)

Do shibari and kinbaku mean the same?

In simple terms, the answer to "What is shibari?" is that shibari , like kinbaku, is a name for Japanese rope bondage. To me and, quite probably, your partner, it is more important how it feels than what you call it.. As they say, a rose by any other name doth smell as sweet.

The first thing that might surprise you is it's that more about the 'how' it's done than just about how it looks. This trailer for The Pleasure of Rope from Bob Bentley on Vimeo will give you an unique glimpse into the world of shibari and give you a more authentic insight than random Googling. If you really want the definitive version, there is now a full unabridged 194 minute 3-DVD available here for only £29.95.

I should start with a translation of the actual words before moving onto a wider discussion:

Shibari: The word shibari came into common use in the West at some point in the 1990's to describe the bondage art Kinbaku. Shibari is a Japanese word that literally means "to tie" or "to bind". See dictionary entry.

In Japanese, this natural-fibre rope is known as 'asanawa'; their vocabulary does not make a distinction between hemp and jute so it is often thought to translate as hemp rope as we know it in the west. I can't say I have seen hemp used in Japan by any of the pro's, so, as you can see, translations aren't so simple.

If you really want to learn more about the definitions and difficulties in translation, read Osaka Dan's article 'My subjective view of kinbaku'.

Is there a difference between shibari and kinbaku?

There is much discussion about the distinction between shibari and kinbaku, and whether one term is more appropriate than another. One modern distinction, probably originating from Osada Steve, which is gaining popularity among westerners wanting to distinguish the terms is that shibari refers to purely artistic, aesthetic rope, whilst kinbaku refers to the artistic, connective, sensual, sexual practice as a whole.

While thousands of books and articles have been written in Japanese about shibari, no one has found evidence of there being any thought given to the distinction between these words among Japanese practitioners of the art. In fact, they seem fairly interchangeable and sometimes the word 'bondage', in English, is used.

A traditional view is that the term 'shibari' is a wrong Western Japonism. The word denotes tying in Japanese, but in a generic way, and traditionally not in the context of bondage. The names for many particular ties include 'shibari', but it is not traditional to call the entire activity that way. (In the same way as there are 'Diamond Knots' and 'Portuguese Bowline Knots', but 'knotting' does not mean bondage).

An even more traditional view is that shibari is a term used for erotic bondage in Japan that is practically interchangeable with the term kinbaku. Itoh Seiu, generally considered one of the fathers of contemporary Japanese rope bondage used the term in the 1950s,[2]with no sign of it being a "western Japonism" as did many other well known Japanese bakushi, from the 1950s until present day, including Nureki Chimuo, Yukimura Haruki, Akechi Denki, Tsujimura Takeshi, Arisue Go, Randa Mai, Osada Steve, Miura Takumi, Nagaike Takeshi, and Minomura Kou (among countless others). One of Nurkei Chimuo's how-to video series from the 1980s, is titled Introduction to Shibari.[3] 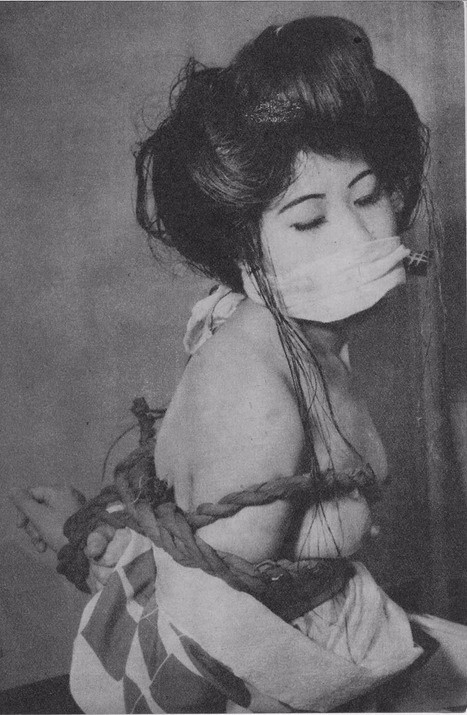 
Some claim this is a somewhat hidebound definition and the word shibari is now increasingly being re-imported from the West to Japan, as the tying communities are very much interconnected. However, I have seen little evidence to support such a conclusion as most practicing bakushi in Japan have very limited contact with the west and almost no interest in debating the meaning of words. Most Japanese kinbakushi do not object to the term shibari, as it's common vernacular in the global community. Another explanation can be found in the linguistic roots of the two words, which share a core kanji.[4]

In the west, especially in America, the term shibari has also been extended to encompass many styles which are a fusion of western and Japanese bondage. Being somewhat pedantic, I feel this is inappropriate, confusing and typical of the differences between English and American English. This being so, the difference can be as great as between the meaning of 'football' to each nationality (Americans use this word to refer to a game closer to rugby and use 'soccer' for what we term 'football'). I prefer the term 'Japanese style bondage' to encompass westernised variants. Typically, the approach is characterised by being more about the destination, i.e. restraint prior to the 'main event' of sex or SM, than the journey.

The ' how' is real secret of shibari as I discovered during my journey into this art which began in the late 90's. Fortunately, since my initial interest was sparked by an article about the more psychological aspects of Japanese bondage, this and the connective side of rope became my focus early on. Consequently, I coined the expression 'tying people, not parcels' and was one of the first westerners to widely evangelise this approach. Sadly, Nina and I feel a lot of people are missing out on the essence of shibari because they are only taught to create a tie in a 'paint by numbers' manner, not what creates the effect. This is something you will learn in our tutorials.

At first sight, shibari might seem complex but we break tying techniques down into simple 'ingredients' explaining not only how, why and where they are used but also how to create the best effect. These ingredients are the foundation of even the most complex 'recipes' (ties) making them easier to create correctly with confidence and to remember.

The aesthetics of the bound person's position is important: in particular, Japanese bondage is distinguished by its use of specific forms and aesthetic rules. Sometimes, asymmetric and often intentionally uncomfortable positions are employed.

In particular, Japanese bondage is very much about the way the rope is applied and the pleasure is more in the journey than the destination. In this way the rope becomes an extension of the nawashi's hands and is used to communicate. I have often heard Japanese masters express this. same feeling in very similar ways.

Japanese bondage techniques typically use jute rope, albeit in days gone by rice straw rope was also used, though some deviate into less conventional materials, e.g. Kinoko Hajime's UV 'cyber-rope' shows, Yukimura's tenugui (cloth strips). The natural fibers easily lock to each other which means the bondage can be held together by the friction of twists and turns or very simple knots. Of course, I use the word 'traditional' loosely since today's recognisable form is relatively young. Here's an interesting podcast if you want to know more about the history of rope and restraint in Japan.


Shibari sounds great, so where do I start?

My advice is to join a local rope group if you can. There might be local 'peer rope' meetings in your area so search for that term. Most are pretty informal so you won't find gimp-suited mayhem or anything remotely scary :-) Sites like Fetlife, BDSM Events Calendar or, even Facebook, are a good place to look for local events and groups where you can find out more, meet like-minded people and generally swap information and learning. I have my own group on Fetlife where you can ask questions but there are many other shibari related ones.. Don't be shy, nobody bites...unless you ask nicely and get lucky!

Of course, good tuition is the key to building a solid foundation from which you can progress and develop your own creativity and expression of your sensuality or sadism. Do your research, work out what you want from shibari and which of the various definitions delivers it. There's a huge difference between, for example, what the more mainstream western Japanese-style riggers and famous Japanese masters do. Find out who knows what they are doing in the style that suits you and has a good reputation. By all means, Google the terms 'shibari' and 'kinbaku'. The 'shibari' will produce more of the former, whilst 'kinbaku' more of the latter and, even more so, if you search using the kanji (緊縛). We tend towards the more Japanese approach here and focus more on the effect than just the appearance. We believe that what we teach reflects a more Japaneses than western perspective. If that's what you want, you are in the right place.

Once you know exactly which interpretation of shibari you wish to learn, there are a wealth of methods: Group classes, 1-2-1 tuition, books, YouTube, DVDs, multi-media and so on. I discuss the pro's and con's in the video below and explain how our multi-media tutorials help you create a well-rounded learning system. In short, the best solution is combining on-line learning with competent real life tuition. The good news is that we are even giving away a free month's subscription to Tying techniques: Part I so you can get a taste of how and what we teach. It's not so much selfless generosity, more that we know you'll be hooked :-)


My suggestions for a starting point are:

What else do you need, apart from a willing partner? Obviously, some rope is essential. Don't get carried away.All you really need to get going is 2-4 lengths of 7-8m long, even one rope will do. It's all about the quality of your tying, not they quantity. Learn to use a little rope to good effect before adding more. It should become an extension of your hands and your will ;-)

Like many things, it is easier to do a good job with tools that are fit for the purpose. You can find out all about choosing and maintaining rope here and Rope-bot will help you choose from the huge range in my on-line shop, ESINEM-Rope. Choose a good budget or mid-range rope to start out. Don't spend a fortune; leave the fancy, light-weight, single yarn ropes till you are good enough appreciate them and not wreck them. A good all-round choice would be something like Tossa Lite Natural and, with free worldwide shipping, cheaper than you'd think.

So, be safe but have fun!

What are you waiting for?