The thing we all fear in suspension is dropping our partner. This can usually be attributed to 'pilot error' or equipment failure, sometimes both. Your rope control and tie-offs need to be meticulous, that's a given. Practice with a dummy load until you are totally confident that you won't drop a live one. When you do start working with a live load, always minimise the downside with secondary lines, work low and over a forgiving surface and less risky positions...landing on you butt from a few inches on tatami is a lot better than a long drop head first into concrete!

Most equipment we use is well within safety margins, assuming we stick with safety rated carabiners, swivels, straps and robust rings and properly installed suspension points. It is extremely unlikely these will fail unless misused.

Like all things, your rig is only as strong as the weakest point, and if you make sure that isn't you, it is likely to be your rope. Most specifically, the key link in this chain will be the main suspension line. I have yet to here of an accident where the tie itself failed due to rope breaking, rather than the main line. It might have happened but I am not worried by tying with 5mm, so long as my more highly stressed suspension lines are more resilient.

The causes of rope failure

The most obvious causes are existing damage due to abrasion or rot and under-specified rope. It is one thing for Japanese pro's to suspend a sub-100lb/40kg model with the highest quality 5mm asanawa in perfect condition and quite another for an amateur to use old, damaged or low grade rope on a 150lb/60kg+ model. Never under-specify your main lines and always ensure they are in top condition. Even with very light models, the critical lines that I use will be more robust than those I tie with. Fully synthetic or reinforced rope is well worth considering for peace of mind.

The weakest point of natural fibre rope is not its tensile strength. It will almost always be at a stress point, e.g. knots or where friction occurs, and thus can be at a much lower load. Having done some limited testing and observed real life rope breaks, it seems that the most common point of failure is somewhat unexpected.

There is an article by Ropemarks describing an incident where I believe this was the cause of failure. My conclusion is that the bight stripped the suspension line due to a fast lift with his wonderful Amazonian model, Dutch Dame. 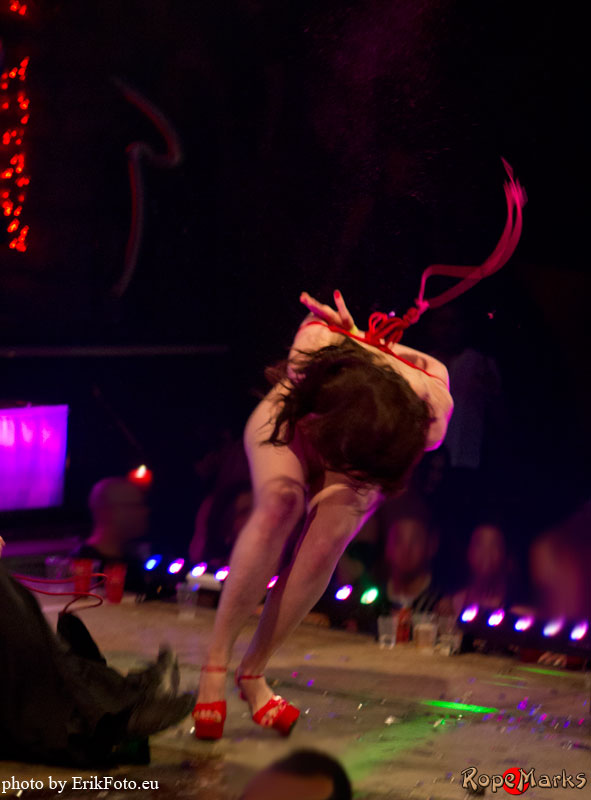 Again, I believe it was a similar mode of failure that happened to Wildties at Bound with Gorgone. This was a fast lift, albeit with a lighter model. However, I understand the rope was past its 'best before date'.

Much emphasis has been put on the bight as a wear point. The argument goes: It is most prone to wear and we generally suspend on a single bight which is weaker than doubled rope. Firstly, two ropes are not twice as strong as one in practice. Tensions will be uneven. If one rope, or even one part of it, is damaged, a domino effect quickly ensues. Secondly, it is the rope running through the bight that gets stripped of fibres/yarns. I know you'd expect the running rope to act like a saw but that's not what happens. Take a look:


Based on my initial testing, it looks as if a double bight creates less of a cutting effect. I need to run a few more to be sure but it seems it could increase the safety margin by 50%. Thus, it would seem sensible to use a double bight for critical lines or, probably better, a carabiner. Bear in mind that shock loading, e.g. by very fast lifts, generates a lot of force.

I will also do tests with carabiners instead of using the bight. I expect an improvement because:

1) They are smooth/less abrasive
2) They create less friction
3) Unlike rope, they do not deform into a V-shape which is likely to be more damaging (think wire stripper!)

Here are a couple of less specific videos which illustrate just how quickly friction can have devastating effects.


If you think, safety rated mountaineering rope is immune, watch this! You will be convinced that friction can be an enemy that deserves immense respect.


PS Do not rely on the load figures as they are merely intended to be comparative, not an indication of the strength of jute in general or what may be safe I have no qualifications or experience of material testing procedures, never even did physics or engineering. I'm just a DIYer with a load cell, hand winch and a little common-sense. So, if you know better, please highlight any flaws.