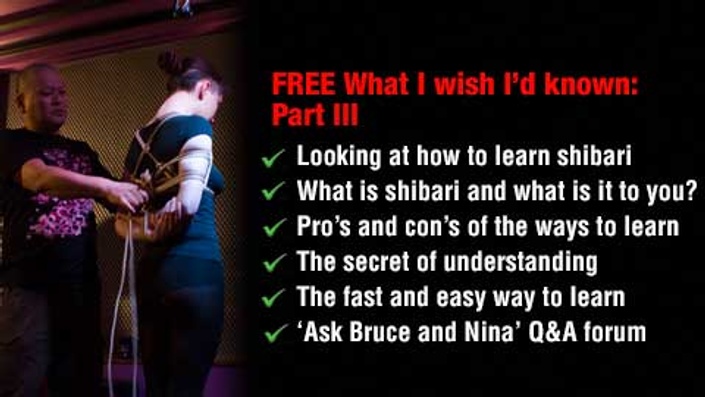 FREE: What I wish I'd known about learning when I started shibari: Part III

In this edition of the 'What I wish I had known' series, I look back on how I learned shibari and give some advice to those starting out and continuing on their journey.

The first step is to decide which of the many definitions of shibari suit your vision. Like many things, it means different things to different people. When you ask "How can I learn shibari?", you are casting a very wide net, much like asking "How do I learn to paint?". What do you want to paint? Pictures? Houses? Vehicles? OK, let's narrow it down to pictures. To get an useful answer, it helps to know what medium and subject matter. Thus, it is by shibari, so I begin by looking at some definitions and styles. These range from what I'd call 'erotic macramé' through Fusion and Japanese style to what the professionals in Japan are doing. The purpose, intent and effect can be equally different.

You'll see that shibari is a bit like an iceberg. Initially, you will be unaware of how much is 'below the water-line'. There is much more to it than there appears to be at first site. You will find that you don't know what you don't know. As your journey progresses, each step will reveal something else of which you were unaware. From this, you might assume it is complicated but it isn't if you reduce it to ingredients and an understanding of them. You will discover a very simple formula for learning which Nina and I have developed from having not only trodden this path before but from honing our techniques by teaching countless students.

The pro's and con's of various ways to learn are discussed so you can choose the best way for you to progress quickly with creativity, connection and safety.


Over the years, he has been improving his skills with the help some of their best known and respected Jpanese kinbakushi, Arisue Go, Osada Steve, Kinoko Hajime, Kazami Ranki and, grand master of newaza, Yukimura Haruki. Whilst drawing from classical methods, his style is distinctive and epitomizes the art of communicating with rope, often departing from the typical serenity of shibari shows and flying in the face of tradition to produce some striking and unusual performances.


In addition, he has worked on various videos, e.g. Primal Scream's 2013, artistic collaborations and photo shoots both on and off camera. He has been involved in projects providing inspiration for Tom Ford's 2013 collection and, Raqib Shaw, an acclaimed artist who has exhibited at the Tate, Metropolitan and White Cube galleries.


He contributed to Rope, Bondage & Power, edited by Lee Harrington and has been involved with a number of documentaries on kinbaku. He is also author of the first English language tutorial DVDs: 'Japanese Rope Bondage: Tying people, not parcels' .

What I wish I'd known about learning when I started shibari: Part III
Available in days
days after you enroll

When does the course start and finish?
The course starts now and never ends! It is a completely self-paced online course - you decide when you start and when you finish.
How long do I have access to the course?
How does lifetime access sound? After enrolling, you have unlimited FREE access to this course for as long as you like - across any and all devices you own.
What if I am unhappy with the course?
We would never want you to be unhappy but since it's free, what do you have to lose? We don't even want your credit card number! Just say hi and buy us a beer if you like the material and we run into each other :-)
off original price!