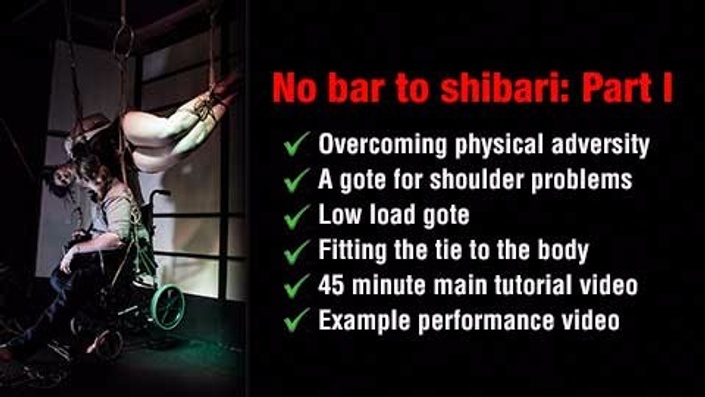 No bar to shibari: Part I

Overcoming adversity and tying to fit the body

In this first tutorial, Cabi will share how he has worked with his partner, Kimokawaii, to overcome the challenges presented by a recent stroke. It affected one side of her body creating a range of other issues, e.g. increased pain, breathing difficulties, lack of movement etc. Whilst you might not encounter all these symptoms in the course of your tying, many of the solutions apply to individual issues or can be used in other situations. So, you will learn how to make a tie fit a person, rather that trying to make the person fit the tie. Not even pro models can achieve every position, so it's the rigger's job to work within their capabilities to achieve the best result. It is no different working with the average person and it is far easier to adapt your tying than to train a contortionist, especially if there are physical limitations.

Cabi will teach you two suspension capable ties. The first is an innovative reverse gote. He has created this tie specifically to address shoulder problems, whether this be a simple lack of movement range that make a hands-behind gote impractical or, as in Kimokawaii's case, the risk of one shoulder dislocating due to muscle degeneration.

The second tie will be more familiar as it is based on what has pretty much become the standard 2-TK (derived from Akechi's) combined with upper thigh support This is perfect for those who cannot achieve the parallel or higher arm positions this tie usually requires since it does not rely on the wrist tie for stability. SInce it is independent, it can be set to zero load unlike the standard version. The construction also allows the loading on torso wraps to be adjusted to reduce the pressure on the chest, which makes breathing in more vertically oriented suspensions much easier. This will be much appreciated by rope partners who seek a bit of extra comfort, whether or not they have any medical problems.

During the tutorial, you'll pick up a lot of tips and learn practical solutions which show our ingredients based approach to teaching in action. This will help develop your problem solving abilities by showing how the ingredients work and how they can be combined creatively

We hope this will inspire those who feel they have to be the epitome of health and physique to enjoy rope and encourage riggers to confront the challenges presented by different abilities. This couple certainly demonstrate that nothing should be a bar to shibari. All you need is a little creativity and a 'can do' attitude. 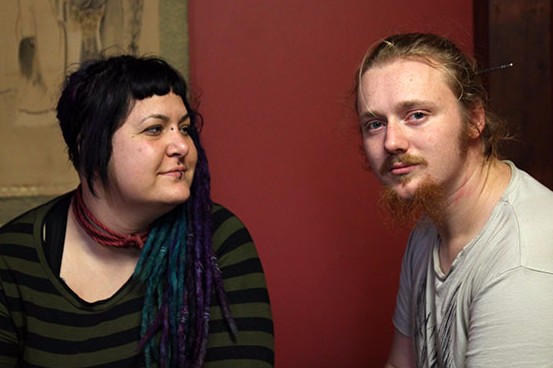 Cabi and Kimokawaii have been tying together; teaching rope; treating rope; and running workshops for 2 years, learning under many rope greats. They run Friction Ropes which holds events that are aimed to be open, accepting, knowledge sharing and accessible to all. They have taught themselves to teach with a wide knowledge base and diversity to include all.

Kimokawaii recently had a stroke and they have used this challenge, along with the other difference to the norm of being a bigger rope bunny, to perform on stage and have been invited to share their message of body positivity, sexual freedom and ability with great aplomb in such places as: Berlin, Moscow, Copenhagen, Edinburgh, Glasgow, London and Brighton.

These two young performers are regulars, who regard BOUND as their spiritual home, and have grown with the event, always amazing us with innovative shows.

Kimokawaii is proud to be, in her words, a “fatter bunny”, but her tremendous strength and courage have proved that there is no bar in shibari, not even having a stroke. There is always a way and spreading this word is now something of a crusade for them both. I think this shines through in her words on at the end of this introduction.

Cabi has worked hard with his partner to make the most of her abilities and to modify his tying to show what is possible. Their tutorials will be an inspiration to everyone by showing how they overcame these challenges. The areas they explore are applicable to many different issues such as size, flexibility, restricted/loss of movement, breathing difficulties etc.

“Things are pretty shit. 4 months ago I had a stroke. I’m paralysed down my right side. Apparently, I’m supposed to feel lucky as 3/4 of my brain died and I should have been a quadriplegic. I don’t feel lucky. I’m grateful that I’m starting to move (although I look like I’m in Monty Python’s Ministry of Funny Walks) but I’m still confined to my wheelchair and can’t do anything without help.

I was doing OK, sucking it up and getting on with it, but now annoyingly were being evicted and trying to do anything this house needs seems impossible. There have been times when I’ve broken down crying because I’ve spilt a drink, because it wouldn’t have happened with both hands. People often say that I’m unlucky and I was so young, but it happens and why not to me. It had to be someone. Bastard.

My owner has been amazing. He kept me even though I told him to go. He became my carer. He takes me out. He helps bring up my son. He does rope with me. Rope has probably been the most frustrating outcome. We asked so many doctors if rope caused it and we got a resounding no (thank god as there would have been hell of a fight to do it anyway!) I have lost all my pain tolerance and flexibility and I felt like it was something I was actually good at and came naturally and now I’m starting from scratch with lots of limitations. My owner has been working hard for me, adapting ties, getting my stretch better, getting my ability back. And we’ve done lots.

We went to Eurix recently and I think I wanted to go so much last time that’s all I had stuck in my head. I was so glad we’d bit the bullet and gone. Scratched that itch. But being there was so hard. Learning new things meant they couldn’t be adapted. I couldn’t do most. And constantly failing in front of everyone was so hard. No one made me feel bad, but I felt that people were questioning my ability and if it was right for me to come. I broke a few times, so aware of how abnormal I was.

It was important to me to be seen to be trying though, that this limitation didn’t have to stand in our way. Limitations never have. I’ve always been proud to be a fatter bunny and let people see rope was for anyone and the disability has just taken that further. I won’t let get in the way. We actually use the wheelchair during rope as an extra fuck you! Things are hard, sometimes really hard, but there is a light way back at the end of this very long tunnel. I can’t be more grateful Cabi. He’s amazing.”

No bar to shibari: Part I
Available in days
days after you enroll