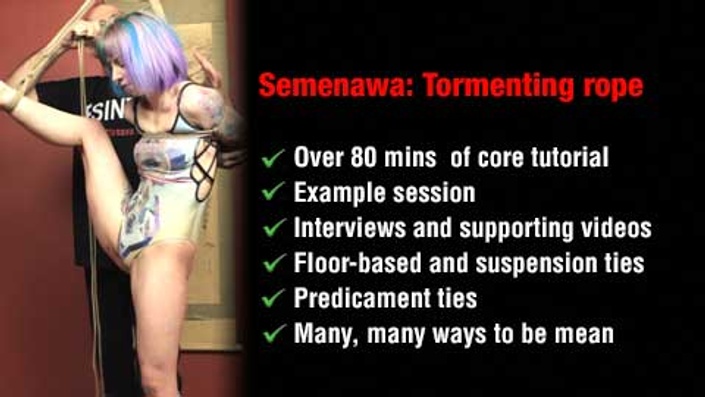 Semenawa (責め縄) means different things to different people. In it's most literal sense, it seems to be translated as 'torture rope' or 'tormenting rope' but that's to over-simplify a deeper and multi-faceted subject. For the purpose of this tutorial, I'm taking it to simply mean the more sadistic side of using rope. In other words, a way of doing SM where your main tool is the rope. Of course, as with any other area of SM play, it is far more nuanced than mere brutality.

The main focus of this tutorial is the hands-on side of creating physical or mental discomfort and predicaments. The core tutorial runs to over 80 minutes are covers a variety of simple, yet effective,floor and suspension ties. In addition, you'll learn an arsenal of new tricks to add a deliciously sadistic flavour to your play:

For those interested in the different approaches and more in-depth study, I have provided quotes, links, interviews and performance video with some of the best known proponents of this art.

Esinem is a Japanese style bondage (shibari/kinbaku) artist who regularly appears at UK and international events. These have included Pride, Torture Garden, Erotica, Rubber Ball, Wasteland, Boundcon, Nuit Demonia and represented the UK at Japan's first international kinbaku event, Toubaku. He is also known for his teaching both in the UK and internationally and as co-organiser of the London Festival of the Art of Japanese Bondage and BOUND, Europe's premier monthly shibari event.

Over the years, he has been improving his skills in Japan with the help some of their best known and respected kinbakushi, Arisue Go, Osada Steve, Kinoko Hajime, Kazami Ranki and, the late grand master of newaza, Yukimura Haruki. Whilst drawing from classical methods, his style is distinctive and epitomizes the art of communicating with rope, often departing from the typical serenity of shibari shows and flying in the face of tradition to produce some striking and unusual performances.

He contributed to Rope, Bondage & Power, edited by Lee Harrington and been involved with a number of documentaries on kinbaku on various international TV channels. He is also author of the first English language tutorial DVDs: 'Japanese Rope Bondage: Tying people, not parcels' .

Semenawa: Rope, the painful way
Available in days
days after you enroll

• For your convenience, subscriptions auto-renew at the end of the period
• You can unsubscribe via Manage Subscriptions on the Profile menu (top right when logged in)
• For instructions, see Help