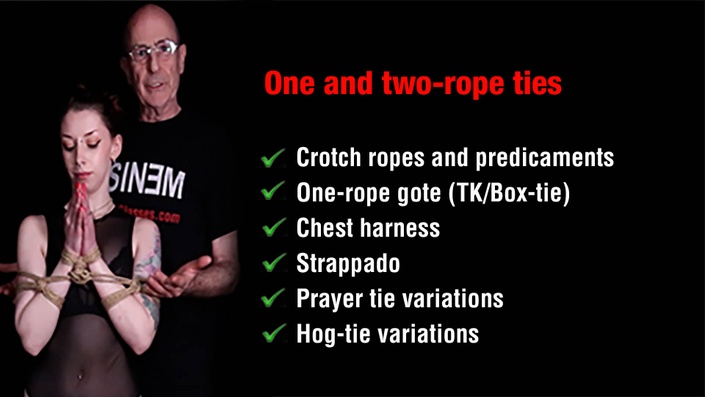 Whilst this course has a variety of easy ties using only one or two ropes, you will learn much more than these 'recipes'. You will learn how to use the few simple ingredients that are used in almost every tie. Once you understand how they are used, and how they can be varied, you will suddenly discover that the only limit is your imagination. Not only will find learning ties becomes logical but you will also become creative and more able to react to your partners needs in the moment. As the old adage goes: "Give a man a fish and you feed him for a day; teach a man to fish and you feed him for a lifetime".

Keeping it simple to make sense

To make it simple, we keep it simple. All you will need to build these important skills is two ropes. You will learn how to build all of these ties with only single and double column ties, plus a couple of frictions. We not only show you a selection of ties but also how you can vary ingredients to change the look but retain the same function.

You will see how components, or modules, can be used to build more sophisticated ties. For example, the one-rope gote and strappado are used to build the two versions of the hog-tie that appear later in the course. As you progress, this knowledge will make more complex ties easier and quicker to learn because the components will be familiar. Two-rope gote (2-TK)? That's mostly a one-rope version plus a single column tie finished with a friction, rather than a knot.

It's all in how you do it

One of the main things that is often overlooked in tutorials is the rope handing. Like any skill that requires artistry, proper methodology is essential. Remember when you painted as a child with a brush clasped in your fist? Well, holding and manipulating the rope is just as vital if you don't want create the equivalent of your childhood daubs. Proper handling instils confidence, shows dominance and allows you to express yourself effectively. These tutorials will help you make these skills second nature.

When does the course start and finish?
The course starts now and never ends! It is a completely self-paced online course - you decide when you start and when you finish.
How long do I have access to the course?
How does lifetime access sound? After enrolling, you have unlimited access to this course for as long as you like - across any and all devices you own.
What if I am unhappy with the course?
We would never want you to be unhappy! If you are unsatisfied with your purchase, contact us in the first 30 days and we will give you a full refund.
off original price!